A decorated military pilot, successful businessman and lifelong, generous supporter of the arts and charitable organizations in the communities where he lived.

A decorated military pilot, successful businessman and lifelong, generous supporter of the arts and charitable organizations in the communities where he lived. 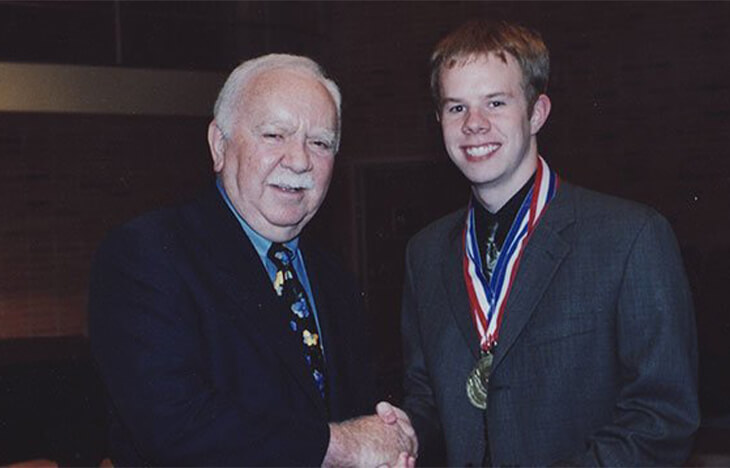 Born in Irvine, Kentucky, in 1933, Bill Schmidt came from a family that loved music and believed in the power of education.

I believe we have a responsibility to give back to our communities, helping people invest in themselves and ensuring they have access to opportunities that foster learning and growth.

These interests continued as his family moved and eventually settled in Evansville, Indiana, where he spent the majority of his youth and adult life. These values and a strong sense of roots would influence many aspects of his philanthropy – a commitment to family and the quality of life of the people of Southern Indiana and Kentucky.

Bill received his Bachelor of Arts degree from DePauw University in Greencastle, Indiana, and his master’s degree in business administration from George Washington University in Washington, D.C. After serving as an Air Force fighter pilot and instructor, Bill helped raise three children while launching numerous real estate and entrepreneurial projects, including the Honey Creek Mall in Terre Haute, Indiana.

A soft-spoken man with great listening skills, Bill was known for his quick wit, his business prowess, his charitable nature and his wide-ranging talents. He was active in his communities as a soccer coach, tenor in the choir, eager golfer, formidable card player and board member of numerous local organizations. After the death of his mother – and with close counsel of his beloved sister, Anna Lee Schmidt Hamilton – he was the patriarch of a large extended family that he continued to love and support.

Anna Lee was an accomplished singer. A 1950 graduate of DePauw University, Anna Lee did postgraduate study at Indiana University and Heidelberg Conservatory of Music in Germany. Her extraordinary career included work as a voice instructor at Butler University, a vocal coach and assistant conductor of the Indianapolis Opera Company, a private vocal teacher, and vocal coach, musical director and performer with the Indiana Opera Theatre.

It was with Anna Lee’s guidance that Bill committed to growing the Schmidt Vocal Competitions, an initiative that has since become a nationally renowned program, touching the lives of more than 5,000 students. With these contests, as well as with his meaningful support of other scholarship programs at numerous universities, schools and community organizations, Bill spawned a remarkable legacy of dedication to the arts and youth that his Foundation continues to build upon today.

In his later life, Bill moved to Sarasota, Florida, where he became a substantial behind-the-scenes supporter of several key community projects, including the Sarasota Opera. He recognized the value of participatory philanthropy, especially grassroots and need-based programs in the Sarasota area.

Bill died in 2014 after a lengthy battle with Parkinson’s Disease, but his love for and commitment to the arts and the community live on in his family, friends and colleagues. The William E. Schmidt Foundation captures Bill’s entrepreneurial and hard-working spirit in the initiatives and projects it selects to fund — always grounded in innovation and led by those committed to a worthy mission.